When you decide to buy cookware (pots or pans), it is very important to identify and know the material used. There are so many materials used for making cookware. Two of the most popular materials used for cookware construction are cast iron and carbon steel. You may want to know the differences between Cast Iron vs. Carbon Steel, and that is what we are going to discuss in this article.

Anyway, carbon steel still has a relationship with cast iron, but both of them have different characteristics, weaknesses, and strengths. You can check these following significant differences between carbon steel vs. cast iron.

Everything about Cast Iron Vs. Carbon Steel Cookware

First of all, we can identify the differences between cast iron and carbon steel from the materials. Cast iron has been used for thousands of years for making a wide variety of items such as tool making, construction, ornamentation, and even cookware. What is an actual cast iron material made out of? Basically, it is a kind of a pure iron that is alloyed with carbon as much as three percent or more. In this case, when we compare it to carbon steel, the cast iron may have more carbon than carbon steel itself. In addition, you also need to know that cast iron is not malleable. In this case, you cannot use a hammer to shape it. Moreover, it is also considered as a brittle metal which makes iron cast susceptible to breakage. 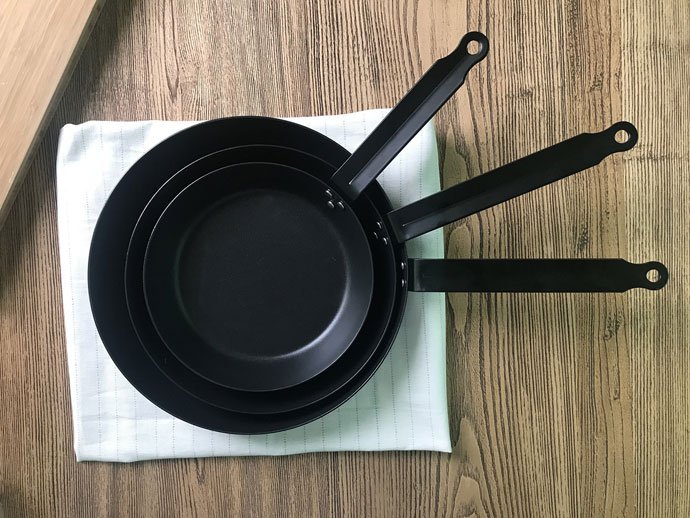 Meanwhile, it is different from the carbon steel construction when it will be shaped into a product. You do not need to convert it into a liquid to shape carbon steel, and it usually begins with a sheet of metal which is already heated. When carbon steel is heated, it can then be shaped using a press machine to get the shape expected. You can also shape it using a hammer or other tools. Meanwhile, when making a pan, the handle will also be formed separately from the cookware construction, and then it will be completed with a rivet for safety.

What kind of cookware products are made from cast iron or carbon steel? Basically, both of the materials can be used to make many kinds of cookware products. For instance, the cast iron is usually used to manufacture muffin pans, loaf pans, grill pans, griddles, dutch ovens, and skillets. Meanwhile, the carbon steel is usually used to manufacture woks, paella pans, crepe pans, and skillets. In addition, you can also check the differences on the heft. The cast iron itself is heavier than then carbon steel. A cast-iron skillet with a size of 12 inches may weight 8 up to 9 pounds while carbon steel skillet may weigh 5 pounds.

How to take care of a carbon steel pan vs. cast iron? Basically, there is no significant difference when dealing with care. After you use this cookware, you can just wash it using hot water, or you can also use a scouring pad. You may use soap to clean it, or you may not need it. Once you wash it with water, both of these cookware materials can dry easily and fast. You can keep this cookware in your kitchen cabinet or hang it on a rack.

How long can you use carbon steel vs. cast iron cookware? Somehow, you also do not need to worry about the durability. Both of these materials have the same durability. You can use it for years because it is made from a hard material that cannot be easily broken. If you ask which one is the more durable between the cast iron vs. carbon steel cookware, then the answer will be cast iron because it uses more carbon than the carbon steel.

In conclusion, those are a few differences between Cast Iron vs. Carbon Steel that you may need to know just in case you decide to buy this kind of cookware material. It seems that carbon steel cookware is better than cast iron in terms of heating distribution. Cast iron may be more durable than carbon steel because it is harder.